Impeccably researched, thought-challenging and leavened by wit, Getting Religion, the highly-anticipated new book from Kenneth L. Woodward, is ideal perfect for readers looking to understand how religion came to be a contentious element in 21st century public life.

Here the award-winning author blends memoir (especially of the postwar era) with copious reporting and shrewd historical analysis to tell the story of how American religion, culture and politics influenced each other in the second half of the 20th century. There are few people writing today who could tell this important story with such authority and insight. A scholar as well as one of the nation’s most respected journalists, Woodward served as Newsweek’s religion editor for nearly forty years, reporting from five continents and contributing over 700 articles, including nearly 100 cover stories, on a wide range of social issues, ideas and movements.

Beginning with a bold reassessment of the Fifties, Woodward’s narrative weaves through Civil Rights era and the movements that followed in its wake: the anti-Vietnam movement; Liberation theology in Latin America; the rise of Evangelicalism and decline of mainline Protestantism; women’s liberation and Bible; the turn to Asian spirituality; the transformation of the family and emergence of religious cults; and the embrace of righteous politics by both the Republican and Democratic Parties.

For readers interested in how religion, economics, family life and politics influence each other, Woodward introduces fresh a fresh vocabulary of terms such as “embedded religion,” “movement religion” and “entrepreneurial religion” to illuminate the interweaving of the secular and sacred in American public life.

This is one of those rare books that changes the way Americans think about belief, behavior and belonging.

PRAISE FOR THE BOOK

“In this thoughtful book, Ken Woodward offers us a memorable portrait of the past seven decades of American life and culture. From Reinhold Niebuhr to Billy Graham, from Abraham Heschel to the Dali Lama, from George W. Bush to Hillary Clinton, Woodward captures the personalities and charts the philosophical trends that have shaped the way we live now.” – Jon Meacham, Pulitzer Prize winner and New York Times bestselling author of Destiny and Power

“For decades, Kenneth Woodward covered religion like no one else in the field: with a keen intellect, an open mind, a big heart, and most of all, the inability to write a dull sentence. In his new memoir, which mixes his own religious upbringing with a typically clearheaded analysis of the times in which he lived (and on which he reported), he takes us on a fascinating journey of what he rightly calls the most volatile religious period in American history.  You may open the book for the historical tour, but you’ll stay with it because of your brilliant guide.” – James Martin, SJ, New York Times bestselling author of Jesus: A Pilgrimage.

Woodward’s book is brilliant—lively, historically informed, and spiced throughout with his trademark wit. Having personally witnessed many of most important events in American religion over the past half century, Woodward provides close-up, moment-to-moment reality to stories others often missed. His judgments are consistently edgy but also appreciative of the achievements of the era’s key players he came to know so well. – Grant Wacker, Gilbert T. Rowe Professor Emeritus of Christian History, Duke Divinity School

“No American journalist has patrolled the borders of that often-troubled relationship between faith and culture longer or better than Kenneth Woodward. He’s a reporter of the old school, taking the time both to get the story right and to be artful about how he crafts his prose. As Woodward says himself, “being there matters,” and in this book, you’ll find the wisdom of someone who’s just flat-out been there. This is a superb book.” – John L. Allen Jr, editor of Crux and author of A People of Hope

“This survey and interpretation of the American socio-religious scene over the past half century is deeply resourced, comprehensive in coverage, fair-minded in its judgments, and eminently readable. It covers much more than politics, but Woodward has original things to tell us on that highly charged topic. His account of the religious right is a model of clarity, and he balances that by calling attention to often overlooked religious dimensions to Democratic party politics — especially the importance of Methodism in the political formation of George McGovern and Hillary Clinton. All in all, a terrific book.” – Philip Gleason, Emeritus Professor of History at the University of Notre Dame.

“If ever there were a journalist who could write of his journey through the multi-dimensional worlds of religion in America — and in the world, it is Kenneth Woodward. Religion Reported is a fascinating account of his almost 40 years as the religion editor of Newsweek. He takes us behind the scenes with illuminating portrayals of some of the major religious and political leaders of the latter twentieth century and does so with thorough research, balanced reporting, candid assessments, and more than a little humor. As Woodward notes, ‘being there’ mattered. It becomes clear that the author has been everywhere on the religion scene and his observations are incisive and insightful.  Readers of this engaging book will feel, as I did, that they were there also.” – Michael Cromartie, Vice President, Ethics and Public Policy Center

Not since de Tocqueville’s Democracy in America, has there been such a personal and insightful survey of religion in American life. Ken Woodward’s Getting Religion is in some ways even better because de Tocqueville was a just visitor to America while Woodward is a sympathetic insider who loves church and state as well as the separation between them that mutually enriches both.  This is a masterful record of the dance of religion on American shores since the second world war.  Ken Woodward may be the only one who could have written it. –Rabbi Marc Gellman, Ph.D., former religion columnist for Newsweek.com 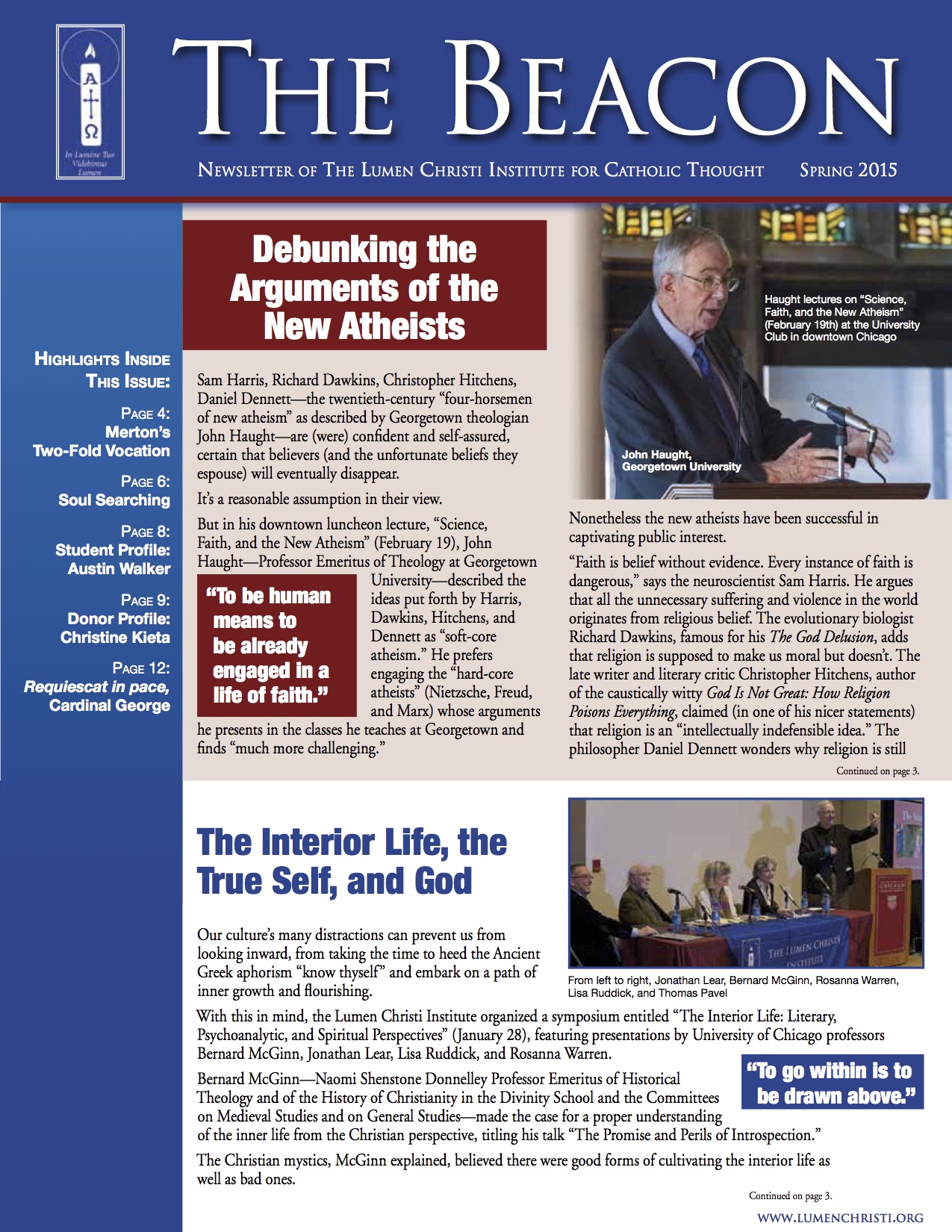 A graduate of St. Ignatius High School in Cleveland, Kenneth L. Woodward received his B.A. from the University of Notre Dame, where he studied literature with the legendary Frank O’Malley. He edited Newsweek’s Religion section from 1964 until his retirement in 2002, which gave him a unique vantage point on and personal acquaintance with the world’s religious leaders. He is the author of Making Saints: How the Catholic Church Determines Who Becomes a Saint and The Book of Miracles: The Meaning of the Miracle Stories in Christianity, Judaism, Buddhism, Hinduism, and Islam. In 2006, the University of Notre Dame gave him its Rev. Robert F. Griffin Award, which recognizes outstanding achievements in writing. His most recent publication is entitled Getting Religion: Faith, Culture, and Politics from the Age of Eisenhower to the Era of Obama.

Martin Marty, an ordained minister in the Evangelical Lutheran Church in America, is the Fairfax M. Cone Distinguished Service Professor Emeritus at the University of Chicago Divinity School, where he taught for 35 years and where the Martin Marty Center for the Advanced Study of Religion has since been founded to promote public religion endeavors. The author of over fifty books, Marty has written the three-volume Modern American Religion as well as Politics, Religion and the Common Good.

There are many ways you can support the Lumen Christi Institute.

Help us spread the light of Christ

Thanks for signing up!